<P>Background: It was previously thought that inflammation and an immune response were the only factors capable of causing IL-1&#946;, IL-6 and other cytokine`s production. In recent years data have appeared that stressful effects can also occupy an important place, enhancing production of IL- 1&#946;, IL-6 and other cytokines; the result will be a change in the functional activity of a particular cell element, for example immunocompetent cells with subsequent development of inflammation, or a change in the functional activity of neurons. This experiment is aimed at studying the effect of the Selank glyprolin neuropeptide drug on the level of cytokines in animals under conditions of “social” stress, the results of which indicate the presence of stress-protective activity. </P><P> Methods: White nonlinear rats were used as experimental animals. A model of confrontations between males was chosen to create a “social” stress. The animals were in pairs in a cage which were separated by a septum preventing physical contact but having openings that provide sensory contact. Each day, the septum was removed for 10 minutes leading in an overwhelming majority to agonistic collisions (confrontations). Laboratory animals were divided into 3 groups: a group of intact males, a group of animals that were subjected to stress (sensory contact) for 20 days and a group that received intraperitoneally Selank at a dose of 100 mcg/kg/day under conditions of 20-day stress. The level of cytokines under study was determined by enzyme-linked immunosorbent assay. </P><P> Results: As a result of the work performed to determine the concentration of pro-inflammatory and anti- inflammatory cytokines, it was found that in the serum of animals exposed to stress, there was a statistically significant increase in the level of IL-1&#946;, IL-6 and TGF-&#946;1 in individuals with both types of behavior. It should be noted that, under the conditions of this stressful impact, there was a tendency to decrease the concentration of IL-4 and increase the level of TNF-&#945; but these indicators were not statistically significant. Evaluation of the effect of Semax on the level of the cytokines in a stress-induced state showed that this neuropeptide causes a decrease in the concentration of IL-1&#946; and IL-6, restoration of the level of IL-4, as well as suppression of the production of TGF-&#946;1 and TNF-α in these conditions. </P><P> Conclusion: This peptide is able to reduce the concentration of IL-1&#946;, IL-6 and TNF-&#945;, as well as TGF-&#946;1, practically reaching control values, when studying the effect of Selank on the level of cytokines under conditions of &quot; social&quot; stress. There is the need for a detailed study of the role of cytokines in the development of stress-induced changes in order to find optimal correction tools.</P> 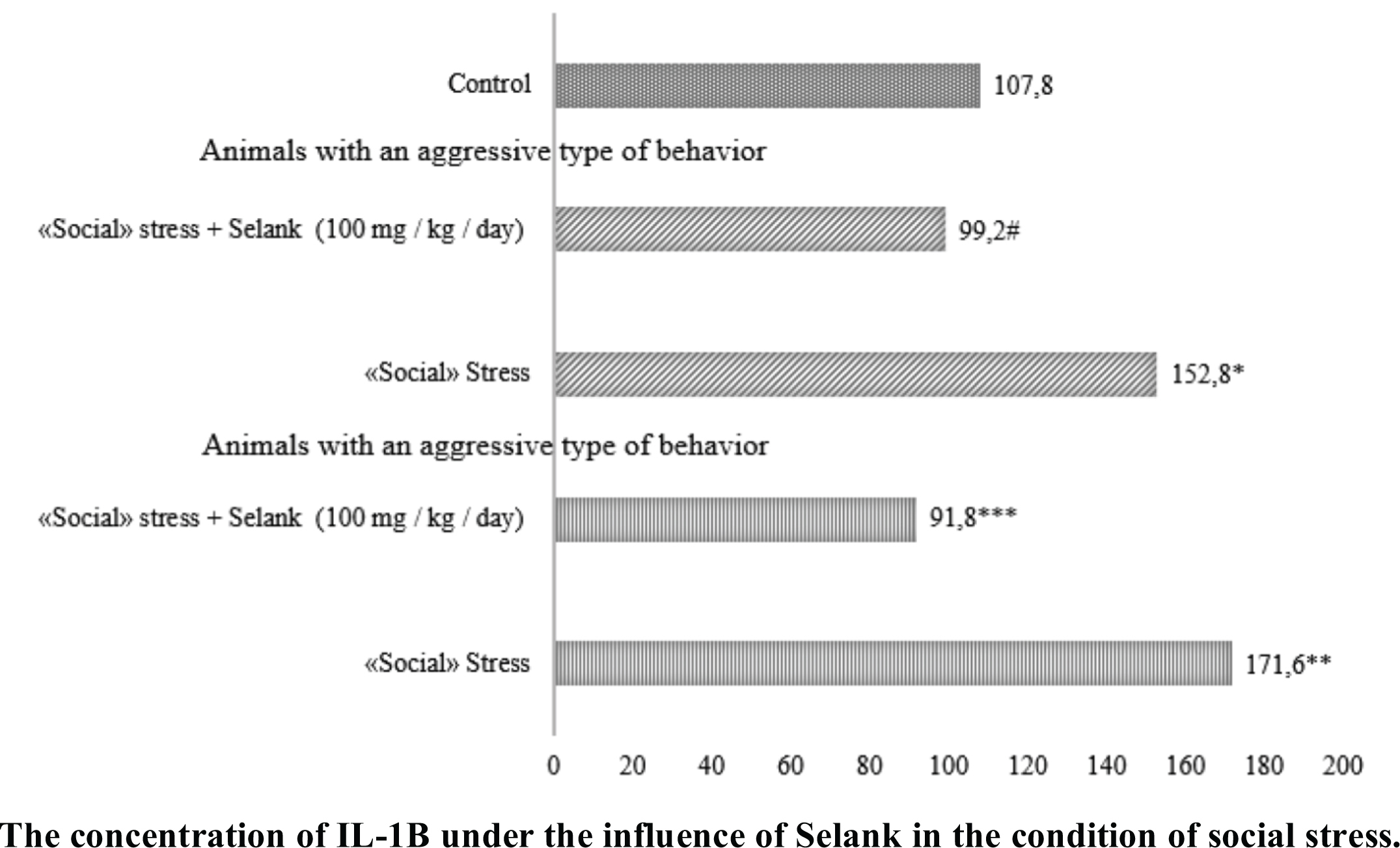