Background: Alpiniae Oxyphyllae Fructus (Yizhi in Chinese) have been widely used as an herbal medicine for the treatment of diuresis, enuresis and diarrhea in China. Many studies have deciphered some potential underlying mechanisms for its anti-diarrheal effects. However, tissue distribution of Yizhi constituents is warranted because pharmacological receptors are frequently located in tissues. Moreover, it is also interesting to know about the potential correlation between behavior in drug distribution and the observed pharmacological response. The aim of this study is to investigate tissue distribution behaviors of Yizhi constituents after oral administration of Yizhi extract to rats, focusing on 10 active principles.

Methods: Twenty four male Sprague Dawley rats were given orally the Yizhi extract and fourteen tissue samples were collected after being killed by bleeding from the abdominal aorta under ether anesthesia at different time-points. The resulting tissues were excised and homogenized. Based on our previous reports, liquid chromatography coupled to tandem mass spectrometry (LC-MS/MS) was used to quantify the target analytes, as well as phase II metabolites, in the various biosamples.

Results: Almost all the targeted Yizhi active principles and some glucuronidated metabolites were qualitatively measured in rat stomach, small intestine, large intestine, as well as liver. Nootkatone, yakuchinone A and tectochrysin were observed in the rat brain. In other rat tissues, these analytes had lower exposure or could not be detected. Consistently, quantitative analysis revealed that the Yizhi active principles dominantly distributed into gastrointestinal tissues followed by liver, the overall exposure levels ranking as follows: stomach > small intestine > large intestine > liver. Tissue concentrationtime profiles of the test active principles in rat stomach, small intestine, and large intestine were bimodal with two concentration peaks occurring at 0.5 and 4h after oral administration, respectively. The exposure levels in rat kidney and bladder were quite low.

Conclusion: The active principles of Yizhi were specially distributed into gastrointestinal tissues after oral administration of its ethanol extract to rats. The tissue distribution behaviors partly supported its anti-diarrheal effects from a pharmacokinetic opinion. This paper will be useful as the starting point for studying the pharmacological activities of this traditional herb. 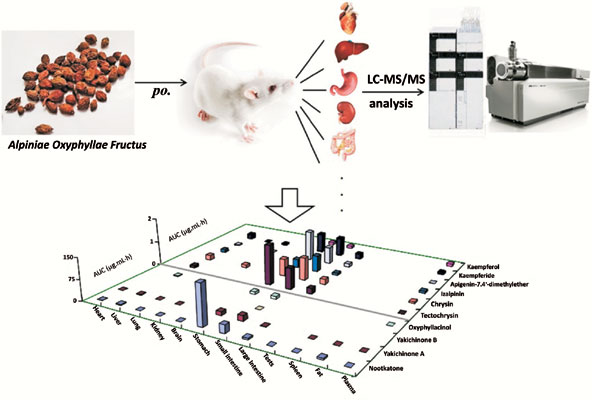