Introduction: Capsaicin (8-methy-N-vanillyl-6-nonenamide), a potential analgesic derived from Capsicum annuum (Chili peppers), widely used from ancient times for its pharmacological activities such as anti-inflammatory, anti-oxidant and analgesic and provides relief from migraine and diabetes. But for obvious reasons, capsaicin cannot be administered directly. The present work was designed with a focus to comply with mandatory requirement in various pharmacopeias to know the actual content of API present in final formulations. The formulation (TS3) consisting of 3% lipid, with 4:6 ratio of the polymer and solvent, was found to be the optimized formulation, which gave the best evaluation with regard to the particle size (97.03±2.68) nm, polydispersity index (0.20±0.00), higher zeta potential (61.28±2.06) mv, morphological studies and highest drug entrapment efficiency (68.34±4.24)%. The prepared transferosome formulation was subjected to characterization by validated HP-TLC method consisting of N-Hexane: Tert- Iso-butyl-methyl ether in ratio (5:15) v/v. Linearity was performed in the range of 50-1500 ng/spot with LOD/LOQ 50 ng and 150 ng, with regression analysis (R) of 99.91%. Recovery analysis was performed at 3 different levels at 80, 100 and 120 with an average recovery of 106.97%, respectively. Till now, no analytical method has been reported, associated with the characterization of pharmaceutical nano-forms (Capsaicin), like transferosomes. Thus, the maiden validated HP-TLC method for concurrent analysis of capsaicin as API in nano-transferosome may be employed in process quality control of formulations containing the said API.

Background: The irritability and adverse effects post application, leading to inflammation and neural pain at the site of administration of newly Capsaicin API and its chemical entities and marketed formulations are usually related to poor permeability, leading to drug complex reactions in the development phases or therapeutic failure along with the quantification of the same in blood plasma. However, advancement in drug formulations with the use of polymer: alcohol ratio and modernized analytical techniques for the quantification of Pharmaceutical APIs seems to be emerging and promising for overcoming pain and related inflammatory complications by formulating the APIs in Transferosome formulation with Validated HP-TLC technique being used as an effective economic and precise tool for quantitative analysis of APIs in their respective nano-forms.

Objective: The study proposes a novel standardized method development and validation of pharmaceutical nanoforms with Capsaicin as API.

Method: Capsaicin Transferosomes were formulated using Ultra probe sonication by utilizing different proportions of phospholipid 90G dissolved in a mixture of ethanol and propylene glycol. The formulation was subjected to Dynamic Light Scattering (DLS) technique for nano-particle analysis followed by characterization with respect to particle size, polydispersity index, zeta potential and entrapment efficiency. The morphological study of vesicles was determined using SEM and TEM. A Validated HP-TLC method for the identification and determination of Capsaicin in transferosomes formulation was performed as per the ICH guidelines.

Results: The formulation gave the best evaluation for particle size (97.03±2.68) nm, polydispersity index (0.20±0.00), higher zeta potential (61.28±2.06) mv, morphological studies (SEM & TEM) and highest drug entrapment efficiency (68.34±4.24)%. DSC thermograms and FTIR spectral patterns confirmed no physical interaction by polymers with API. The prepared formulation was then characterized using HP-TLC method. The best resolution was found in NHexane: Tert-Isobutyl methyl ether in a ratio of 5:15 v/v. The Rf was found to be 0.3±0.03. Linearity was performed in a range of 50-1500 ng/spot, with regression analysis (R) of 99.91% Further, recovery analysis was done at 3 different levels as 80, 100 and 120 with an average recovery of 106.97%. The LOD/LOQ was found to be 50 and 150 ng, respectively. Precision was carried out in which % RSD was found to be precise and accurate.

Conclusion: The outcomes of the present study suggested that the proposed novel formulation analyzed by Validated planar chromatographic technique (HP-TLC) for Capsaicin quantification in nanoforms may be employed as a routine quality control method for the said API in various other formulations. 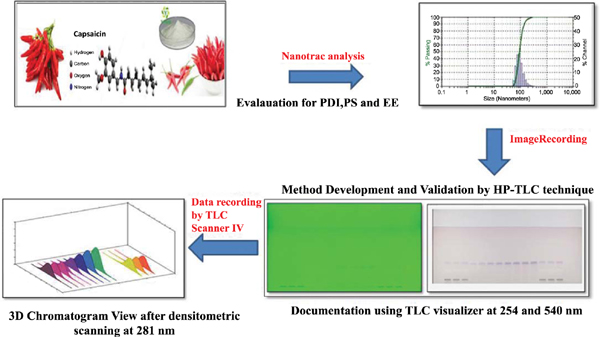